The Three Musketeers. The Holy Trinity. Geddy, Neil, and Alex.

It’s been a wonderfully exciting week or so. A direct message from Dewar’s on Twitter. Strange clues and exotic tomes containing single-malt whiskies. And in the dizzying array of items and splendid, gorgeous packaging and presentation, I ALMOST FORGOT TO REVIEW THE DAMNED THINGS! I mean, I tasted them…but I kept putting off really publishing my findings. Today, I rectify that oversight.

But not before I show off some of the stuff that came along with the three single-malt offerings. If you read my initial Whisky Mystery blog, you learned about the entertaining riddles and such that accompanied The Aultmore. Well, not to be outdone, the Royal Brackla packaging featured an actual wooden box with hinged lid. Inside were two hefty, etched glasses, along with a little tin of honey, some raisins, almonds, and apricots. It was an alcoholic pick-a-nick basket, eh Boo-Boo? 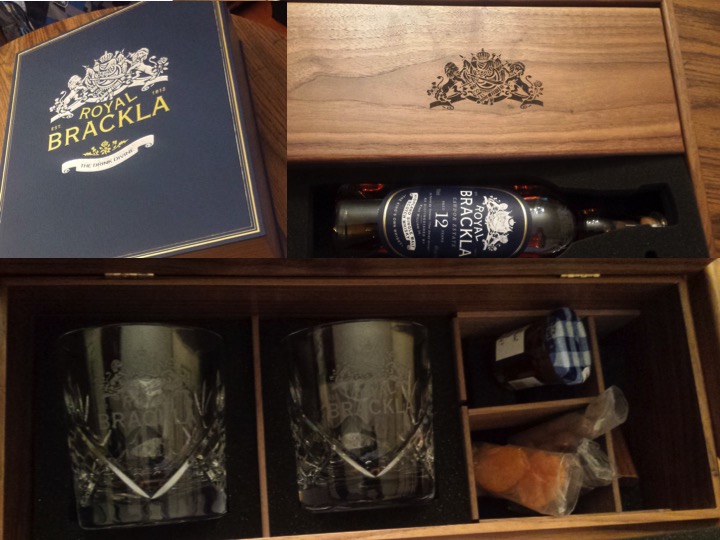 Everything a growing boy needs!

And the Deveron featured some great nautical design, and…oh yeah…a friggin WATCH! Plus, the bottle of scotch itself was magnificent.

I totally wanted the “D” in this particular case.

More on that in the actual reviews, which start right now.

The Deveron (Mystic, Wise, Spiritual Advisor and Best Friend of the Captain)

The earthiest nose of the lot. Not overwhelmingly so, but it’s there. Like wet leaves. Faint spices. A hint of the seaside in there, too, although that could be my imagination, what with the overwhelming nautical theme of the gift box and the incredibly beautiful frosted sea-glass bottle. (Seriously, somewhere right now some rum distiller is kicking themselves for not stealing all of the Deveron’s look prior to the mass-release of this fine single-malt.)

Warm vanilla. A dark fruit, like plums or dates. Not a lot of peat, but it’s lurking in the background for an opportunity, hanging out with the yummy malts and tobacco bite, waiting to spring out at the finish. Delightful and mysterious, this dram. It feels a bit heavier on the tongue than the other two. Sweet, but not cloyingly so. Good stuff. A great alternative to the regular old bottles you have in the cabinet. Pour some for a friend and ask them to guess what it is.

Looks light, and smells the same. DON’T BE FOOLED! The nose is almost totally unassuming. It almost didn’t seem like scotch, until I concentrated. There was alcohol here (oh, was there ever! More on that later) and a fruitiness, like maybe pears. If chardonnay were a whisky, it would smell like this.

I didn’t see the first punch coming until it was too late. Let this be a warning to you: there is a substantial alcohol bite to this little guy. And frankly, I found it a bit overwhelming at first. I checked the bottle and saw that I was sampling a nice 92 Proof beverage. Well, now. But the good news is that just like the very high-alcohol Sailor Jerry rum, there were flavors to be had. The Aultmore is just a little too eager, a headstrong rookie. Be patient with it and you’ll find the good. There’s a lovely apple/citrus sort of tang to it. A bit of sherry and a tiny little taste of oak. It also feels very light on the tongue. In other words, you would almost expect this whisky to be a lightweight “starter” whisky. It isn’t. And once I poured it over some ice, it settled down and was delightful. I tried the 12-year-old variety and thought it was okay. I think that a bit more aging would help tremendously, so I can’t wait to try the older varieties and see if I’m right. One final note: if you’re a fan of peat in your single-malt, look elsewhere. That’s not bad or good, as peat, like malts or spices, can be very divisive. (I once opened a bottle of Laphroaig in front of my wife and she turned her nose up immediately, saying that it “smelled like band-aids.”) The Aultmore, by contrast, is virtually smoke-and-peat free. So maybe it is a good starter whisky after all…

Royal Brackla (The Steady Captain With a Zeal For Adventure)

Okay, let’s get this juvenile bit out of the way. It’s hard for me not to make fun of things. The name of this bottle was no exception, with my mind racing between Blackula and Scott Bakula. No matter, as the drink was the best of the three which I had the pleasure to taste. We’ll start with the nose: It smelled of scotch. And I mean that in the very best way possible. It was fragrant and wonderful and familiar. Some apricots, some flowers from a meadow, and a dash of black pepper. Yes. This was the one.

Oh, so buttery on my tongue. There’s that pepper again. And something else, some dates or raisins. A bit “darker” taste than the Aultmore, and even though they were both 12-year-olds, the Brackla just tasted more finished. More mature. A man’s drink. A hint of pipe tobacco on the finish balanced by mellow honey. A steady hand on the tiller. Oak and rich leather. Yes. My go-to single-malt whisky has long been Glenlivet 12. This one may supplant that bottle, as it claims some of the things I love about Glenlivet, but with a bit more complexity. Looks like Royal Brackla might be a tiny bit more expensive, but with rumors of Glenlivet running out of the 12-year-old vintage, I wouldn’t be surprised to see them end up at about the same price before long. Either way, I won’t mind spending a few extra bucks for this bottle. It’s the goods.

In conclusion, I’d say that it’s all great news for whisky fans. These three single-malts will seem oddly familiar to Dewar’s White Label drinkers, but much more complex and interesting. Three great single-malts that will serve as a wonderful opportunity to transition from blends, but strong enough to stand on their own amongst the established pantheon of great whiskies. Of the three, The Royal Brackla is the clear winner. It’s the James T. Kirk of this lot, with the Deveron as Mr. Spock (or Guinan, actually…or Troi) and The Aultmore a cheerful Ensign Chekov. I’ve had the pleasure of rotating the three bottles and it’s been a grand week to say the least. Seek ’em out. Enjoy them. Savor them.