I have some pet peeves.  Nothing major, just things that drive me nuts.  For example, when I go to write with one of those clickable ball-point pens and the tip is already extended but I click it anyway because one would assume that it was retracted by the last person to use the pen and GGGGAAAAAAHHHHH!!  That horrible feeling of the plastic end of the pen scraping the paper.  That’s worse than fingers on a chalkboard. 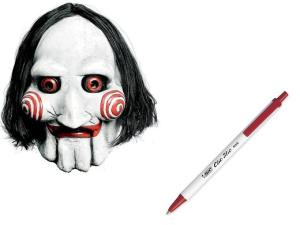 Another peeve?  People that replace the toilet paper roll incorrectly.  The paper MUST drape over the outside, people.  There should never be a roll of paper between me and the next sheet, which seems to be hanging out surreptitiously in the shadows, leaning against the wall like some drug pusher.  “Pssst…hey, bub!  Wanna wipe?”

It’s like he’s mocking you. Wipe that smug look off his face. With your ass!

Such occurrences are rare, however.  Easily forgotten about until they rear their ugly, annoying heads.  The three things I’m going to mention below are things that genuinely anger me, and there’s not a damn thing to be done about them.  I think that’s why they vex me so:  it’s like the universe itself wants to hurt my feelings.  Starting with…

People In the Movies Never Say “Goodbye” on the Phone

This is something my Sweet Baby once pointed out to me, and ever since she did it has driven me up the FREAKIN’ WALL.  Here’s a snippet of made-up dialogue from oh, I don’t know, let’s say Dexter.

DEB, INTO HER CELL PHONE: Hey, Dex!  We got a lead on that Trinity Killer thing with the bathtub and whatnot.

DEXTER, ONE HIS PHONE IN THE KILL ROOM: Oh, hey!  So, what do you know?

DEB: Not much.  Turns out the killer kills people in threes.  And sometimes in bathtubs or something.

DEXTER: Wow, that sounds great!  I’ll be right there!

I mean, as an aspiring writer, I can appreciate the need to keep the story moving.  Momentum.  Transitioning from one scene to another. Whatever.  But when something breaks me out of the artificial reality of the scene, it’s ruined.  Like when an actor is miscast.  If the audience keeps thinking “Wow.  George Clooney is actually playing Batman” instead of “Go get ’em, Bats!” then you’ve failed as a filmmaker. 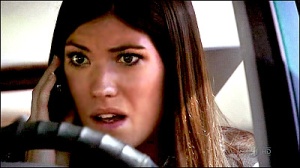 “What do you MEAN our series finale sucked? Whelp, gotta go! Bye!”

In real life, people say “bye” at the very least.  We’ve all been in the situation with our significant other that goes something like this:

ME: Okay, I’ll just stop by the store on the way home.

SWEET BABY: I love you too!  Have a great day!

ME: Okay, you too! Talk to you later!

SWEET BABY: I love you, too!

CLICK!  AND SCENE!!  That sort of exchange can go on and on and on, especially if you’re newly in-love with someone and neither of you wants to hang up.  Such conversations admittedly don’t move the story forward. Unless the story is a romantic comedy, the screenwriter can’t afford to spare the ten minutes of dialog to a banal kissy-faced bit of the mundane. But to assume that two people that love each other AREN’T GOING TO AT LEAST SAY ‘GOODBYE?”  That’s ludicrous.

“WHAAAAAT?!?!” you’re saying.  You’re saying this because you know I love ol’ webs.  He’s my favorite single superhero.  That’s saying a lot. I loves me some X-Men, Batman, Avengers, Luke Cage, so on and so forth.  But Spidey is the king.

So, what exactly is the problem?  The name.  Spider-Man.  Or, more specifically, the way people screw it up.  See that little dash in between the first word and the second?  That’s called a “hyphen.”  And when we write Spider-Man’s name, class, we must always remember that it’s hyphenated.

Not Spiderman.  Not Spider Man.  Spider-Man. 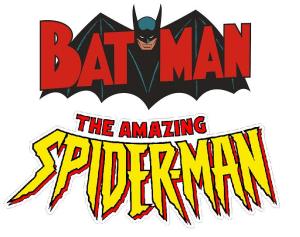 At least Bats can always use Bruce Wayne’s steely jawline as a hyphen in a pinch.

I know it’s nit-picky.  I know.  It’s like remembering which letters to capitalize in GLaDOS.  Tricky.  But also simple.  Batman?  Hell, I think the sky’s the limit with his name.  It’s appeared on comic covers as Bat Man or Batman.  On rare occasions, we get to include the article “the.”  The Batman.  Sure, they prefer you compound-word that bitch all proper-like.  BATMAN. But whatevs.  The Dark Knight is flush with cash and ain’t care.

Please just give ol’ Spidey some respect.  Spell it right, please.  Thank you.

I’m lumping these together because they are both terribly stupid, selfish, and ignorant.  They also share a love of stupid bumper stickers.  Both groups are awful people who either refuse to learn the rules of politeness and decency or just refuse to employ them.  Driving too slow in the left-hand lane (or too slow in general, as I have zero patience for people who don’t exceed the speed limit.  Seriously, people; speed.  Speed, all the time.  We’ve got places to be) or shouting about “The Benghazi” without even knowing what the hell the fuss is all about.  Mouth breathing, FOX “News” watching turds.  That’s what all of these people are, and I want to fill a landfill with their useless corpses.  Fuck ’em.  Fuck ’em all. 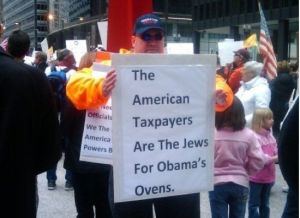 I’m sure he meant that in…uh…in a nice way.

Okay, it got a little dark there at the end, but now you know what bugs me.  Of course, many of you will now use this information to completely ruin my day.  Fair enough.  When you call to gloat, just remember to say “bye.”