I know I’m supposed to posting new blogs based on the feedback I got a week or so ago when I solicited ideas from you, and I promise to get right back to it (and, hey?  Look at me with, what?  Three blogs in less than a week?) but the overload of celebrity-news crap that started with the Affleck-as-Batman bombshell and petered out with Mileygate, I felt it was my duty to keep up.  Besides, some of you really dig these fake celebrity scandal write-ups.  So let’s dive in!

CORRECTION: this is actually a picture of Renée Zellweger from the future.

Full-figured voice actress and former child star Mindy Cohn is hoping to revamp her Hollywood career by following in the sexy footsteps of Britney Spears, Selena Gomez, and most recently, Miley Cyrus, by putting on what has been described as “one sexy Vaudevillian burlesque!” at an upcoming awards show or Kroger grand opening.

“I’m just waiting for my opportunity to show the world what I got!  ‘Cause I got a lot…and it’s all HOT!!”  says the plus-sized vixen. Cohn has been working on a “suitably shocking” routine while working around her ongoing gig as the voice of Velma on the successful Scooby-Doo Mystery, Inc.  “We’re just waiting to hear back from either the Golden Globes or the new Kroger Supercenter in Studio City.  Whatever’s going to give us the most exposure for my exposure, if you catch my drift!”  Oh, we read you loud and clear, lady!  Loud and clear!

The Diceman Cometh to Tarantino Sequel! 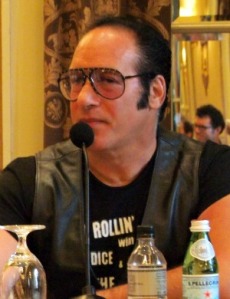 ADC answers questions at the press meeting for Reservoir Dogs 2

Hot on the heels of the longtime funnyman’s surprise dramatic turn in Woody Allen’s Blue Jasmine, the bombastic Andrew Dice Clay has already landed another high-profile project: the eagerly-anticipated sequel to Quentin Tarantino’s Reservoir Dogs, tentatively titled Reservoir Dogs 2: Nice Guys Finish Last.  “It’s a blast!  Who knew, right?  Last flick I done, I get to work with a classy broad like Cate Blancett, who, you know…she’s English or some sh*t, so that’s class, buddy.  Class for days, am I rite?  And now?  Now I get to work with Stephen Baldwin AND that guy from Scrubs! [John C. McGinley, rumored] Unfrigginbelievable!”  Of course, some Hollywood types are taking a wait-and-see attitude towards Clay’s sudden cinematic chops.  Tarantino himself released the following statement:

“I’m so angry right now. Angry at myself for stupid rookie mistakes I made when we first shot Reservoir Dogs, my first film.  I stupidly overlooked a couple of loopholes when we signed the distribution rights, and now I’m powerless to stop this train wreck of a cluster-f*ck.  For starters, the title?  Apparently that’s a reference to Nice Guy Eddie, the character from the first film.  My problem?  Nice Guy Eddie is DEAD at the end of the movie, and the guy that played him is ALSO DEAD.  Hey, spoiler alert, assh*les:  EVERYONE DIES BUT MR. PINK!!  There can’t be a f*cking sequel!”

There has been no response from the studio, and the film remains in pre-production. 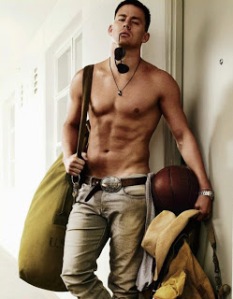 In a bombshell announcement that rocked the world of geek-culture for the second time in as many weeks, Columbia Pictures announced a bold last-minute re-casting of one of comicdom’s most popular characters.  With only weeks of production left on The Amazing Spider-Man 2 as the cast and crew strive for a May 2014 release date, the lead role of Peter Parker (who famously dons the mask as Marvel’s web-slinger) has been given the ol’ switcheroo.  Out is Andrew Garfield (The Social Network) who took over the red-and-blue tights for the first big reboot (The Amazing Spider-Man, 2012) and in is current it-boy and panty-dampener Channing Tatum.  The studio explained the sudden casting change this way:

“As much as we love Andrew, the test audiences just wanted someone ‘bulgier’ and ‘hotter.’  Plus, once the guys at Warner Brothers hit us with that Ben Affleck casting news, we knew we had to amp up the sex appeal in a big way.  I mean…have you seen the abs on C-Tates?!”  Tatum is no stranger to last-minute reshoots.  The release of G.I. Joe: Retaliation was delayed by a year in order to add more delicious Channing Tatum beefcake.  The same sort of frenzied shooting schedule is expected for the Spidey sequel if the studio sticks to its May release.