Holy crap…it’s almost been an entire month since my last post, and that one was a throw-away quickie.  Been busy, folks.  My radio station has been slowly transitioning to a new location, kids are busy, I’ve had shows like Best Ink Season Two to watch (TEAM TERESA!!!!) and Far Cry 3 to complete (with the GOOD ending, thank you.)  So I figured I’d jump back in with another Hollywood Nooz style entry.  If these things keep doing well, I’m going to have to create an entirely new blog for this stuff.  That way NOTHING will get updated. 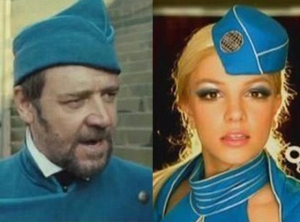 Powder blue is the new tangerine!

Buoyed by his recent critically acclaimed turn in the big-screen adaptation of Les Miz, gruff-but-loveable Kiwi Russell Crowe has stunned the music world by agreeing to appear as part of this summer’s hottest ticket:  the eagerly-awaited tour of pop diva Britney Spears.  Brit decided to forgo any more reality-TV judging gigs in order to wow live audiences with mediocre lip-synching, and decided to bring out the big guns!  “I always loved Russell as ‘Wolverine’ but had no idea he could sing!”  As for what drew the burly, bearded, boy-band wannabee to the tour, Russell admitted that he initially “thought ‘Les Miz’ was just a flick about French lesbians and professional wrestlers.  Imagine my shock when it turned out to be this gay Occupy movie!  Loved it. And the outfits?  FABULOUS.”

Staying in the world of music, we were excited to hear the bombshell that Miramax dropped last week when they announced another gritty reboot, this time of fan-fave cult film ‘Napoleon Dynamite’ slated to begin pre-production in the next few weeks.  The newly re-branded ‘N4pole0n’ already boasts Jon Hamm and Jennifer Lawrence as part of the cast, and at the press meet-up it was announced that the coveted role of Kip Dynamite would be going to none other than Red Hot Chili Peppers frontman Anthony Kiedis! “I’ve acted before, so it’s not like I’m completely out-of-sorts” said the star of Point Break and that one Charlie Sheen film.  “Plus, with my history of drug addiction, I feel like I can convey the proper gravitas and self-torture that the role of Kip demands.  I’m, like, totally stoked, dude.”  The Jim Jarmusch-helmed drama should hit theaters in time for the Holiday 2014 season.

We may finally have an explanation for what’s taking author George R. R. Martin so long to finish his sword-and-sorcery epic ‘A Song of Ice and Fire!’  It may have very little to do with the ongoing HBO adaptation; even as the smash-hit ‘Game of Thrones’ sails into its third season, another GRRM project seems to be taking up most of the author’s time.

It seems that over the last dozen years or so, Martin has kept an intricate journal of his life.  Now Paramount is keen to reap some of that ‘GoT’ cash, and has optioned the diary for a big-screen biopic starring Hollywood funnyman Zach Galifianakis as a young George R.R. Martin.  Pre-production is already underway, with Galifianakis doing location shoots in Harlem and San Salvador.  The ‘Hangover’ star told us about what drew him to the project: “Well, George is a shabbily-dressed fat guy.  And since John Goodman is way too old, that pretty much leaves me.  Now, please…just leave me alone.”