Last night my Sweet Baby (the lovely Heidi L. Watson, pictured) and I sat down to watch “The Hunger Games.”

Heidi had already seen it, but thought I’d enjoy it, so I Redboxed that shit and away we went to cinemaland right in the comfort of our own home!  And it was a decent flick.  I won’t do a full review because you either already know all about it or don’t give a shit.  But I will say that it was a film that had the effect of being better as a whole than it was while watching it.  In other words, it was like I was holding my breath for complete greatness through the whole thing and felt like it never quite got there, but then as the credits rolled at the conclusion of the film, I found myself wishing for more.  I wanted to know what happened next, and THAT, ladies and gentlemen, is how you launch a successful franchise.  But I had a few questions, none more glaring than this: (KIND OF SPOILER-Y STUFF AHEAD.  Nothing major, but you’ve been told.) 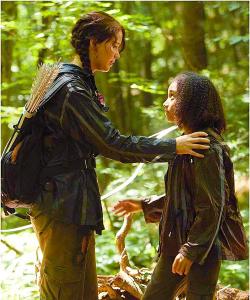 One of these two doesn’t make it. I TOLD YOU!! SPOILERS!!

In the film, the “Show” has a bunch of producers and is done on this futuristic soundstage/holodeck construct.  And the directors can add trees, fire, daylight, or rampaging, wild, Zuul-like dog-beast things to the mix to make life more difficult to the contestants.  Based on this technology (in the film: I’ve never read the book series) they can whip up whatever they want at the push of a button.  Cool!  Okay then, here’s my problem:  WHY DON’T THEY WHIP UP SOME FOOD FOR EVERYBODY?!? For God’s sake, there are people starving to death out there in the Districts!

“Wait, that’s the whole POINT!” you argue.  “The Capitol wants to keep the people hungry and subdued.  Sure, they could make a bunch of bison or something for the people to butcher and eat, but then they wouldn’t be all…uh, hungry…and, uh, restless.  They’d be more docile, like full-bellied people tend to be, so…wait…wow!  You’re right!  A poor, hungry populace breeds discontent and resentment for those that have more…so, yeah.  Okay, Turner.  You’re right again.  YOU’RE ALWAYS SO DAMNED RIGHT ALL THE TIME!!”
I know, child.  I know.  Or, how about this?  Let the people die and whip up some virtual miners to get the coal (seriously?  They still mine coal?  WTF?!?) or even a constructed army to keep the people in line.  It just seems like they’re using this technology all wrong, that’s all.  And if these animals and such aren’t real at all, just super-realistic holograms, then…then how do they kill people?  Is it like the Matrix?  In other words, if you believe this weird wasp thing has stung you with psychedelic venom,then your brain “makes it real” with honest-to-God bad trips and night sweats?  Okay.  Whatever.

I AM WILLIAM RIKER, AND I VOLUNTEER AS TRIBUTE!!

But I have a few more general, non-Katniss-related questions…

Like, why didn’t Wile E. Coyote just order a goddam pizza already?  He’s a scrawny dog living in the desert, and yet he has ordered from ACME supply company the following items:  a rocket.  Roller skates.  Bird feed.  Iron buck shot.  A super-sized magnet. A “Bat Man” outfit (copyright lawyers had to be ALL OVER that one.) Etc.  Um, order up some MRE’s or something, dude.  Let the bird go.  (Another theory: the RoadRunner is either a hallucination born of starvation or a digital construct, and Wile E. is actually a tribute from District 4.)

MY PARENTS ARE DEAD!!

Why does a gynecologist (or any doctor, really) leave the room while you get undressed?  I mean…they’re going to see the good stuff anyway.  Also, how many times a year does an attractive female doctor have to deal with erections while either checking for hernias or testicular anomalies in men?  And the PROSTATE?! Fuggetaboutit! Like a phalanx of man-wood each year!

Pictured: NOT a real doctor.

How much wood COULD a woodchuck chuck?  And why?

Even better? How much Woodchuck could a woodchuck CHUG?!?

Finally, why can’t I get the theme from the 2009 Star Trek movie out of my head?  Seriously…it’s omnipresent. (Actually, I already know the answer.  It’s because Michael Giacchino is an amazing composer, that’s why.  Gott DAMN!!  He’s done everything from “The Incredibles” to “Super 8.” Check out his work HERE.) Also?  I think it’s time to write another Star Trek-themed blog.  Like I haven’t just kinda done that.