Getting ready to go camp out at McDonald’s for Ronald McDonald House, so I thought I’d throw a quick blog together.  It’s sort of like leftovers…and it ain’t even Thanksgiving yet!  Bing!  In other words, no rhyme or reason here, just more random thoughts and observations. Such as…

Those are the Stark words, and living in the wasteland that is Northern Indiana, it’s a fact that’s on everyone’s mind.  me?  I love winter.  LOVE. IT.  I love it for many different reason, but one of my guilty pleasures is leaving work after it’s been snowing and using my arm to clear a little space on my windscreen.  Not the whole window, mind you: just a patch.  Then I pretend I am driving an old Sherman tank like in Battlefield.  I suggest you try it.  however, please try not to be too terribly drunk when you do so.

Nazis in my shoe

Sometimes the seam of my sock loops over my little toe.  It’s one of those things that I try and tell myself is no big deal at first.  “I’m sure it will shake itself out before long.  No big deal.  It’s just a sock, after all.”  After about thirty minutes, it feels like there is a little Nazi sneaking up behind my toe with a wire garrote.  Little bastard is totally trying to cut my piggy’s head off.  I hate Nazis.

Some people make a big deal out of “ethnic” names.  You know what I’m talking about: Daekwon, LaToya…names that tip you off  to the far-away origins of the person’s family history.  You know, names like Ian, Connor, or Josh.  Aboriginal names like Braden, Caden, Jaden, and Binladen. (Okay, that last one was a joke.) It goes in cycles, though.  I would say there was a 100% chance that the white kid serving you pretzels at the mall in 1998 was named “Josh.”  And here’s another little insight into my situation:  in college I briefly squatted with some fellows in the campus apartments at the University of Southern Indiana.  Turner Watson, Marcus Gresham, and Micah Hawkins all sharing a room.  People would look at the housing rolls and assume we played for the basketball team.  Racist? Possibly.  But absolutely true. Later in life I had a surfing buddy named Lawrence Hawkins.  Also terribly white.  Never judge a book by its cover, people.  (Notice I didn’t say you people.)

Wu Tang is not a group of troubadours to be trifled with lightly, good sir.

Adult bookstores are great places to stock up on gag gifts.  Funny cards.  Bachelorette party supplies.  And Avatar-themed Fleshlights.  The bachelorette stuff always strikes me as funny.  You girls are so nutty!  A straw that looks like a penis!  HOW CRAZY IS THAT!  LOLZ!! See, when guys go on a bachelor party, they drink and look at titties.  It’s what you do.  Some cool bachelorette parties do the same thing.  Hell, my lovely wife and I actually ended up at the same strip joint the night of our respective parties.  Got his-and-her lap dances.  It was awesome.  ladies, THAT’S how you begin a healthy marriage.  Which makes me wonder about how much actual materiel the adult bookstores sell every year.  My guess?  A crap-ton.  And there’s a very simple reason: camouflage.  Say a gal wants a personal sexual toy or marital aid.  She goes to the bookstore.  She shops around.  Finally, after exhaustive research and hours of self-debate, she settles on the $250 double-ended Taint Ranger with vibrating love rabbit, perfect for those nights at home watching Twilight!  Only now she feels a little self-conscious.  As she approaches the checkout, the young lady wonders whether the cashier will thin she’s a deviant (hint: no.  No, they won’t.  Those employees see REAL deviants every single day.) So to confuse and obfuscate, she grabs a “#1 Bachelorette” tiara, some penis straws, and a colorful “Bride to Be” feather boa.  She’s going to pass the $250 Vadge-inator off as a gag gift.  And God bless her.

While on the subject of femininity, what the hell ever happened to these things?  I remember the first time I ever encountered one in high school…fumbling around under her shirt, prolly clawing the shit out of her back in a vain attempt to smoothly undo her brassiere and free her budding teats into my waiting, eager hands.  After about ten minutes of this nonsense, she pushed me back, lifted her shirt, revealed the magical mamary-constraining mechanism, and out came the globes.  It was very anti-climactic.  I was trying to be all George Clooney.  I was not.  Good riddance to these abominations, now that I think about it.

Whaddayouknow! Heaven has a front gate!

What the fuck is that? Strawberry?  It’s not cherry.  I know that shit for damned sure. 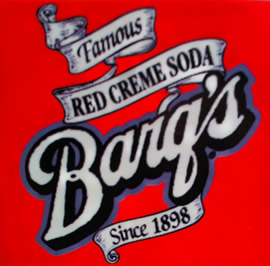 Don't know what it is, but I drank the shit out of it in college art class.

Ever see a parking lot or side street with a spiderweb of cracked pavement…that someone has painstakingly gone over and caulked with that rubbery black stuff?  What the hell, dude?  I understand that you don’t want big asphalt chunks laying all over and the resulting ever-widening holes and whatnot.  But how about just re-paving that shit?  Can it really be more troublesome?  I don’t get it.  I don’t. Then again, it’s pretty obvious that there’s a lot I don’t get.  Life is a mystery to me.  Like a front-clasp bra in eleventh grade. 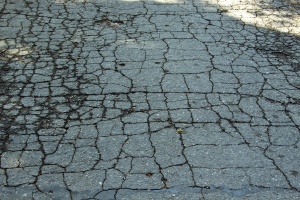 No problem! We'll have this banged out in about twenty years.