In reference to the title of this entry: THAT’S WHAT SHE SAID!  So, there’s that.

Anyway, I noticed a couple of things the other day.  One:  I start wayyyy too many paragraphs with “Anyway…” so I’ll try to get more creative with my transitions.  Two, thanks to you reading this blog (and all the other entries herein) I’m approaching 10,000 views since the beginning of August.  Dayum…I never figured people would actually want to read this!  So in all sincerity, thanks.  And keep spreading the word!  Would it be out of the realm of possibility to see 20,000 by the end of the year?  Or to put it bluntly: can a nigga get a table dance?

So they had me in a “Brainstorming” meeting today to help a client find ways to market a series of sex-type classes for couples.  I shit you not.  They actually WANTED me in there.  Most of my ideas were rejected.  I suggested that the client have a series of classes called “Your Wife’s Asshole Is Like a 9-Volt Battery: You Know You Shouldn’t Put Your Tongue On It, But You Will Anyway!”  I also mentioned that many of us would sign up for a class called “Bitch, It Ain’t Gonna Suck Itself” and also “What The FUCK Was That Noise, And Where Did It Come From?”  I was asked to leave the meeting early.  Their loss!  But while I was bored, some thoughts crept into my had.  Here are some of them…

1. You know what would be terrifying?  Not zombies.  Fuck zombies, man.  They’re slow. (REAL zombies are slow.  28 Days Later was Rage Virus, you imbecile.)  Ah, but what if some mad genius outfitted an army of zombies with Segway scooters?  A horde of undead douchebags with Bluetooth headsets coming after me? I’m OUTTA here, Jack! Get me to some stairs, stat!

While writing this piece, I had NO IDEA that this was already a thing! Seriously, Google "zombie on a seqway." I'll wait.

2. People know I don’t like the show Big Bang Theory (ahem…) but did you know that the guy that plays Sheldon on that show was recently a guest star on iCarly?  True story.  He played a patient in a mental ward, and he was actually very entertaining.  See, sometimes you have to hate the game, not the player.

3. I’m starting a rumor, right here and now, that a big-budget remake of “Smokey and the Bandit” is underway with Michael Bay writing/directing.  Ryan Reynolds has been cast as Bandit, and Emmy Award-winner Peter Dinklage is signed to play Smokey.  In fact, in this remake the name of the character Buford T. Justice has been changed to simply “Smokey” because they want this thing to be as stupid as humanly possible.  I love the Dink, and though I hate to see him belittle himself (see what I did there?) with this kind of role, but dude…strike while the iron’s hot!  (Seriously, though…his Tyrion Lannister is spot-fucking-on.) 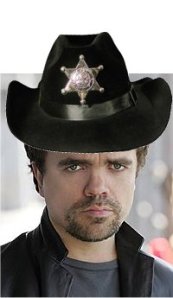 4. Speaking of “Game of Thrones,” does anyone else think that George R. R. Martin only added the extra “R” initial so that people would call him “The American J.R.R. Tolkien?”  If so, that shit worked, because that’s EXACTLY what everybody calls him.  Maybe he’s just a big railroad fan.  Maybe somebody took his first choice, George H. W. Martin.  I ain’t care, long as he gets to writin’ some more books, y’all!

5. Finally, I learned recently that it was after the Battle of Bannockburn during the Scottish war of independence (the big one) that the esteemed GaGa’s received their peerage, land, and title.  Brave Lord GaGa so confounded the troops on both sides of the battle that Robert the Bruce was able to cement his claim to the Scottish throne by getting wasted and puking all over the Stone of Scone, which became customary at the coronation of every British monarch since.  In fact, the name of the sacred stone comes from the simple fact that scones were all the Bruce had eaten that day.  The English, upon seeing this horrifying display, wrote their digits on a bar napkin and left the field.  The Bruce never even called them back.  Actually, he totally ran into the English army a few weeks later and claimed he’d meant to call but couldn’t find their number.  Oh, and he dropped his phone in the toilet, so yeah.  But he suggested that maybe they could totally hang out one day.

9 thoughts on “Quick and Dirty.”