This blog sure has been willy-nilly of late, ain’t it?  Sorry about that.  New schedule…summertime business.  Them’s the breaks.  While I’ve got you for a minute, I just wanted to slap together some stuff that might keep you busy until the next “real” blog entry.  Just some stuff I like.  Maybe it’ll help you wrap your head around me a little.  For example…

The Novels of James Ellroy

Gott DAMN that guy can write.  I’d never read any of his stuff before the movie adaptation of L.A. Confidential hit theaters.  But that flick blew my skirt up, so to speak, and my dear ol’ mom got me a copy of the screenplay.  It was as good or even better than the movie!  Sounds weird, I know…but the script had so many great notes and asides that nicely filled in the gaps between book and movie.  Here’s what you do: next time you’re at the library or bookstore, check out/purchase/read/steal the screenplay for one of your favorite movies.  Terminator 2 is AMAZING in screenplay form.  (Pretty goddam good movie, too.)

Kim Basinger’s cleavage in no way influenced my decision.

Anyway, recently I started picking up some of the other Ellroy books, to fill in the rest of his “L.A. Quartet.”  I read ’em out of order, because I wanted to read “The Big Nowhere” first.  See, the main character is a scummy bagman/former cop named Turner Meeks.  In the movie version of “L.A. Confidential” they change his name to Leland Meeks.  WHAAAAAA?!?!  Why would you change that awesome name?  Doesn’t matter, because in the movie he’s just an old guy and then a corpse under a house.  Meh.  Maybe it’s better that way.  Fuck you, Leland!!  (Oh.  Maybe I should’ve said “spoiler alert.”  My bad.)

But then I read “The Black Dahlia.”  Holy shit, what an amazing read.  The movie version kinda sucked.  I will say, however, that the casting director got some things right.  As I started reading, I thought “This Lee Blanchard character sounds a lot like Aaron Eckhart.”  I went to IMDB to refresh my memory of the film and DAMN!!  Aaron Eckhart played Harvey Dent!  Or Lee Blanchard!  I’m all confused.  But in closing, read Ellroy’s stuff this summer, then play some L.A. Noire and sip a good Scotch, neat.  You owe it to yourself to lose yourself in late-40’s/early-50’s Los Angeles.

As I write this, there are 75 days until Shark Week on Discovery.  As I write this, there still hasn’t been a better shark-related movie than Jaws.  Did you know that Spielberg’s big gamble which also became the first “summer blockbuster” is 37 years old?  Did you know that “Deep Blue Sea” was a steaming pile of HORSE SHIT?!?  Okay, maybe that thought had occurred to you.  The point is, if you are a shark junkie like me, there just isn’t enough quality shark-related programming out there.  Discovery treats sharks like the goddam McRib, only dangling them in front of us for a LIMITED TIME!!  GET ‘EM WHILE THEY’RE HOT!!! Or, you know…while they’re cold.  Because, you know…cold-blooded.  Fish and all that. 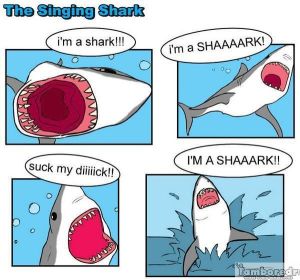 Did you know that there are over 350 different kinds of sharks?  Did you also know that there will be substantially less if stupid motherfucking shark-finners, sport fishermen, and the Japanese don’t stop fucking things up?  Yeah, I’m swearing, because that shit gets me mad!  Jesus, people…these things have been around for 64 million years!  If there were still dinosaurs walking around, you bet your ass they would be off-limits as far as soup-making materials and touristy necklaces go.  So why do people think it’s okay to mess with the sharks?  Maybe I should start the rumor that Mahi-Mahi are one of the deadliest killers in the depths of the briny sea!  Did you know that the deadly Mahi (otherwise known as “Dolphin Fish even though they are nothing like dolphins) can devour an entire water buffalo in a matter of seconds?  Fact.  They’ll strip your dog down to bones in the blink of an eye, which is much more terrifying than the scene in Jaws when you see the kid on the raft go under and then we zoom-in dolly-out on Chief Brody’s reaction on the beach.  You know all those dog skeletons you see washing up on the beach when you hit Ft. Lauderdale?  Thank the evil Mahi-Mahi for that.  Another fact:  “Mahi-Mahi” is actually an old Polynesian word for “red-fanged evil smile fish which is a killer of children and dogs”  I know, the Polynesian language is fucked-up, but that’s what it means.

Okay, I’m going to quit now, because I’m getting mad.  If you’re curious/want to help, by the way, check these folks out…http://www.stopsharkfinning.net/

I’ll be back with a heapin’ helpin’ of good old-fashioned entertainment soon.  In the meantime, read James Ellroy and wait for Shark Week.  I love you!  Carry on.