A little backstory.  Remember the scene towards the end of “SLC Punk” where Steve-O recounts how Bob turned him on to punk rock?  The two of them are playing D&D in the basement and listening to Rush?  That scene is so powerful to me because THAT’S EXACTLY THE WAY IT HAPPENED.  Well, not exactly.  See, I was Steve-O (which is weird, because people say I look like Matthew Lillard) and big-time into the D&D and the Rush.  Still am.

People fail to realize that we ALL looked like this.

Anyway, one day while playing an obscure role-playing game called “TOON” which involved being a cartoon character (I shit you not) my friend Steve (irony!) played a tape he had from a band called the Dead Kennedys.  We listened to “Kill the Poor” and “Holiday in Cambodia.”  It was…different.  I won’t lie and say that I was immediately hooked, but it opened my eyes and ears to a new world.  This was also my junior year of high school, which was my favorite.  The year my hair got long, I wore black t-shirts and flannel, etc.  That year my girlfriend introduced me to a place called The Ross Theater.  They showed Rocky Horror on the weekends and local bands played what would later be dubbed “alternative” music. That year I had a shit-eating smirk in my yearbook picture because I finally had stopped caring what anybody else thought. Very liberating. A year or two later, someone hooked me up with a cassette copy of the Descendents “ALL.”  THAT was when my journey to the dark side was complete. Halle-fuckin-lujia.

Fast-forward to the mid-nineties.  I had found gainful employment as a radio DJ.  I was living a double-life as a country radio DJ who happened to go to punk shows on the weekends.  Two awesome things happened the summer 0f ’94: I met my future wife and I got fired from the country station, right as a band called “Green Day” blew the fuck UP.  Rancid followed Green Day, the Offspring ran though the open door, and bands like Face to Face and Wax followed them out into the world.  It was glorious.  By that time I had started work at a local rock station and got to see this all happen at the same time as the second wave of great Seattle bands hit:  Pearl Jam’s second and third albums had pushed them right to the top, Nirvana’s “In Utero” was huge in spite of/due to Kurt’s suicide…rock was king.  Punk rock had put it there.  It was during this glorious time period that I saw the beginning of something dreadful, horrible…scene-destroying. I met my first hipster.

Thanks for ruining one of my favorite beers, assholes.

Don’t get me wrong.  There have always been and will always be music snobs.  Remember virtually everyone in “High Fidelity?”  Yes.  But this cat was…different.  His name was Marc, and he worked for a local entertainment magazine.  His music reviews were smarmy, his dress code bohemian-Greenwich Village/industrial, and his attitude smug and superior.  See, he had been part of “the scene” for years, but resented the fact that now HIS beloved bands and sounds were being…gasp…mass-marketed and sold at places like BEST BUY!!  OMG, it was like anyone…anyone at all could walk into a store and pick up a copy of fIREHOSE or the MC5.  Blasphemy!  So he started doing what hipsters do.  He put down his heroes, abandoning them in the same way that he imagined they had abandoned him.  I mean, this motherfucker had a vinyl copy of “Bleach.”  Now that it was being re-released for ignorant frat-boys to purchase, well…he just couldn’t have that.  Many of us had similar reactions.  I mean, the whole CULTURE had been based on the fact that the way we dressed, the music we liked, etc. was not for everyone.  We were outcasts.  There’s a reason the perfectly-named Misfits became such a counter-culture icon (seriously, think of five friends.  One of them has that spooky skull-mask t-shirt, don’t they?)

They just don't wear it quite this well.

But there were two ways for the disaffected to deal with this new world.  One, you turned back the clock and held on to your old bootlegged Stiff Little Fingers tape.  You put up old show flyers on your walls and wore unique colognes. (When I was younger, patchouli was used by all manner of subculture types, myself included.  Then it got co-opted by the Phish set and hippies have pretty much owned it ever since, even though patchouli and leather jacket is one of the most awesome scent combos ever.  Pity.) Two, you rejected anything and everything to do with the bands that you once championed.  You stopped listening to Rancid after they were featured on the Beavis and Butthead Do America soundtrack, and even went so far as to stop listeing to Operation Ivy.  You sought out the “next big thing” and got in early.  The only problem with that philosophy was that eventually the inevitable would happen:  the stuff you liked would get popular.  You’d hear a snippet of The Strokes “Last Night” in a car commercial.  The cycle completes itself.  Always. 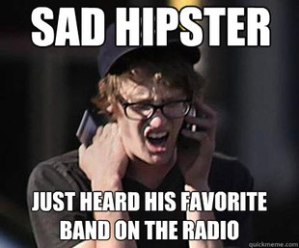 See, it’s hard to hate on a band like this.  They’re succesful.  They’re a new generation’s Aerosmith.  And you know what Aerosmith used to be all about?  Partying and fucking.  I actually think that was the name of their second album (citation needed.)  You know what KISS used to sing about?  Yep.  how about Van Halen?  Ditto.  People, the Holy Trinity is this: Sex, Drugs, and Rock-n-Roll.  Notice that Rock-n-Roll finishes the race in third place.  Hell, for many bands Rock-n-Roll is simply a means to acquire the first two.  It’s okay.  I don’t particularly like it, but it’s okay.  Even better?  This sad, singular truth that the hipsters won’t embrace: If it weren’t for Nickelback and their ilk, there would be no reason for hipsters to exist.  There would be no punk rock, no counter-culture.  Without a Goliath, David is just a kid with a rock.

In a world with Nickelback, David is a kid with a rock…that you’ve never heard of.

22 thoughts on “On Hipsters and Nickelback.”