My dear friend and wonderfully successful multi-media darling and Dream Lord (that’s the new title I’ve bestowed upon her by virtue of my standing in the Affiliation of Gilead) Lauri Loewenberg suggested that I do a fake celebrity gossip blog.  Before I launched such an endeavor, I thought I’d try it out first.  You know, take ‘er for a test drive. (The blog concept, not Lauri.  Although, have you seen her?  Dayum.)  Anyway, here goes…

NEW YORK – With pre-production over, shooting FINALLY began in earnest on the big-budget adaptation of “The Very Hungry Caterpillar.”  Hugh Jackman, who plays the leading role, told us exactly what drew him to the character:

“Well, he’s a bit of mystery, isn’t he?  I mean, here’s this caterpillar with only one purpose in life.  One purpose that we, the audience, can see.  But then, well, it’s  a bit of a shock at the end, innit?  Crikey!” 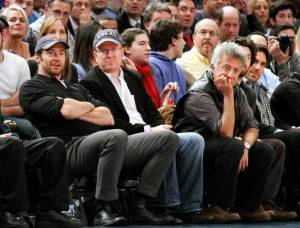 The superstars took time out from filming recently to catch a Nicks game!

Dustin Hoffman seemed incredibly eager to get to work, even though it meant hours spent in makeup and motion-capture CGI rig.

“It’s wonderful.  Simply wonderful.  This is the first time I’ve gotten the chance to combine two things I’ve never really done before.  I get to literally become a singing leaf through the magic of computer animation, and that’s wonderful!  And I get to indulge myself by singing a few old Negro spirituals. And I can say ‘Negro’ because our peoples have been through so much.  And by ‘our peoples’ I mean, of course, actors and athletes.”

Hoffman went on to say that he was more than excited to put such utter crap as “Mister Magorium’s Wonder Emporium” in the rear-view mirror once and for all.

“I will make a successful kid’s movie.  I WILL. ‘Hook’ was so long ago.  So very long…”  the actor then drifted off, staring into space for a few moments before wiping away a bit of drool and excusing himself.  “The Very Hungry Caterpillar” is scheduled for a Holiday 2014 release.

Minaj signs a few autographs before being whisked away by the LAPD.

LOS ANGELES – Pop diva and possible space alien Nicki Minaj  had a bit of a scare recently. Upon arriving in Hollywood for the taping of American Idol, the superstar was met at LAX by Los Angeles police detectives keen to speak with the musical harpy regarding the supposed theft of a pair of her underpants.

“We just couldn’t believe anyone would do that.  Anyone.  Seriously.  Nobody would do that.  Steal her panties, I mean.” That’s according to Detective Ryan Doheny of the LAPD.  He and other law-enforcement personnel began to doubt the singer’s assertion that her “draws been snatched!” when they figured out that “draws” meant “underpants.”

After a brief interview with police, Minaj was free to go.  Detective Doheny concluded by saying “I seriously don’t know what’s going on.  I mean…what the f*ck?  I need a Tylenol.”

SAN DIEGO – Joss Whedon certainly has a lot on his plate. The Avengers director and Firefly creator seemingly has a dozen irons in the fire, and shows no sign of letting up.  The rumor machine fired into high gear recently when Hollywood insiders hinted that Joss may take over the Star Trek franchise when JJ Abrams begins work on the next batch of Star Wars properties for Disney.  Rumors that gained steam when, ahead of the upcoming Comic-Con in San Diego, Whedon was spotted on the town with a man many refer to as “the guy behind the guy.”

Whedon’s mystery man just may be his silent partner…

Who is this mystery man?  A possible sleeping Hollywood giant?  A brilliant script doctor?  A talent-spotter extraordinaire?  Or a tubby Trekkie fanboy known only as “Sam?”

The Whedon camp is mum, giving only this cryptic answer to our prodding questions:

“We have no idea who that kid is.  He just shows up.  Joss took a picture with him last year, and now he, well…he just hangs around.  It’s getting sort of annoying”

Hmmm…sounds like someone is trying to throw us off the scent!  that’s fine with us, as long as that Whedonesque magic keeps-a-comin’, even if it really is all thanks to the mysterious “Sam.” (Wink-wink!)