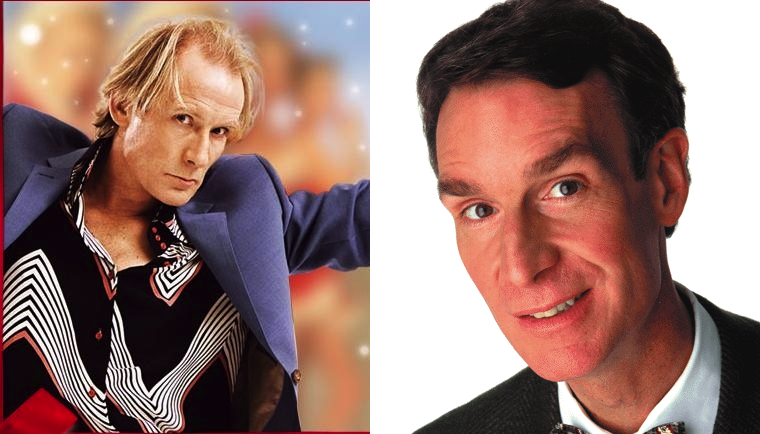 Okay, you know the drill (unless you’re just now discovering this blog, in which case, welcome!  Have some dip!  It’s delish!) Now and then the random crazy thoughts and notions in my head must be purged, so here we go again.  A little housekeeping.

I used to smoke a pipe.  A tobacco pipe, no less.  It was the 90’s.  I would probably still smoke one to this day, but smoking a pipe is much like eating Buffalo wings:  it’s too much work for the amount of gratification.  You hafta pack the tobacco in strata of compaction and texture, then light it and possibly re-light it and sure, the amaretto vanilla smell is extraordinary, but Jesus…it’s just easier to grab some Black & Milds and go to town. That thought led to me to this one:  why the hell haven’t the hipsters taken up pipe smoking?  They already have the old-school glasses, neckties, Smith Corona typewriters and Schiltz beer (I am trying to get hipsters to drink that stuff so they leave the decent beers like PBR and Hamms alone) so it would make total sense that they would all take up the ludicrously time-consuming and attention-grabbing act of tobacco pipe smoking.  They should be all over this shit.

I left the Shire before it was cool.

I think I may have covered this in a different post, but here’s one hard fact of life, my friends: The green and pink hippos in Hungry, Hungry Hippos always rule. They are good and fast, with smooth action.  You always get tons of marbles with those two.  However, the other side of that coin is that the yellow and orange ones (at least one, usually both) suck.  Terrible.  The jaw sticks open, the neck doesn’t go all the way out…something.  Avoid at all costs. BTW, did you know all those hippos have names?  I don’t know what they are.  Probably something like Geoff or Brad.  Brittany, maybe.

There was a series on Showtime way back in the day (back when we’d watch the cable movie network late, late, way after we should’ve been in bed, in order to glimpse the nightly showing of Porky’s, Zapped, or some Shannon Tweed flick; anything with some skin) called “Steambath.”  Here was the entire premise of the show: heaven (Nirvana, Elysium, whatever you prefer to call your afterlife) was a steam bath.  That’s it.  Guys died, they went there, they sat around talking about life or whatever (I honestly don’t remember much of the show, as I was about twelve and it didn’t have laser guns or tits or laser-tits, so I couldn’t be bothered.)  I think this is a show ripe for a Netflix revival.

I think this is from the actual show, and I’m pretty sure that’s Bill Bixby.

There are two phrases that have been completely ruined by musical numbers from animated films within the last year or so.  They are expressions that you can’t possibly utter now without hearing someone belt out their own rendition of the song that incorporates the phrase in question.  They are “Let it Go” and “Everything is Awesome.”  The sad thing is that I never realized how often I use both phrases until the goddam singalong thing started.  It’s a living hell.  It’s like living in my own private ongoing production of “The Rocky Horror Picture Show” done as a Disney/PIXAR monstrosity.  Fuck. 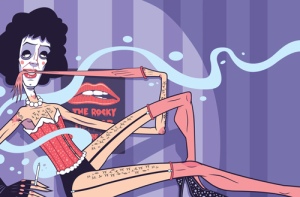 So close. Maybe Frank would work better in a Ren & Stimpy revival…

I think hats fell out of favor because of Hollywood.  See, men in particular (but everyone, really) used to wear hats.  Fedoras, Derbys, Homburgs, etc.  But then they started making movies.  And in the movies, you want to see the faces of the big, bold stars up there on the silver screen.  So they’d contrive to have the hero go without a hat.  Seriously, think of Humphrey Bogart.  Sure, he had his lid on for a few minutes in Maltese Falcon and at the very end (the tarmac scene) of Casablanca…but otherwise, it was his slick pompadour and a cigarette hanging out of the corner of his mouth.  And guess what everyone in the United States of America has always done?  Imitated the people they see in the movies.  Slowly but surely, as fewer hats appeared onscreen, fewer were seen on the heads of the fine young men and women of the USA and freedom-loving peoples all over the world.  That’s why even today you’ll find everyone in North Korea wearing hats.  Because those godless commies don’t allow easy access to American cinema.  (Okay, I really don’t know what the hat situation in North Korea is, but fuck ’em.) 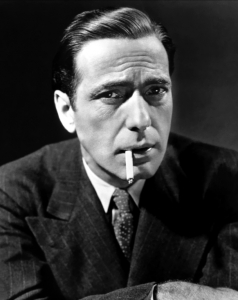 And no, Bogey. Liking margaritas does not make you gay.

Television science guy and ambassador for rationality Bill Nye is NOT the same guy as crusty English actor/sea monster Bill Nighy. They’re two completely different people.  In fact, one is English and the other is not.  Plus, according to some internet sources, one of these two pronounces their last name “Nigh-hee.”  Just wanted to clear up any confusion.  Also, Gordon Lightfoot might look sort of like one of these two, but he is not.  Not either of those two guys.  The science one and the English dude.  Okay, I wanna go home now.  Seeya.

See, now I don’t remember which is which.