So, I’m watching the Walking Dead the other day, and it hit me.  It hit me like a bolt from the blue.  It had been bothering me that I couldn’t place where I knew Norman Reedus, AKA the show’s best character, Daryl, from.  It was right there in front of me but I couldn’t connect the dots.  Then, BAM!  Epiphany! He’s none other than Murphy McManus, one of the vigilante brothers from “Boondock Saints.”  I’ve always thought that the film was over-rated, so maybe that’s why I didn’t get it at first.  If you spaced on the connection like I did, here’s your photographic memory-jogger… 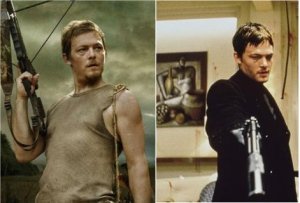 So then I got to thinking about other actors who fall into the “Holy crap!  That’s the guy from _________!!” category.  For example, the bad guy from Avatar?  He’s also the dude from “Terra Nova” which should be cancelled any minute now.  “Okay,” you say, crossing you arms. “That was EASY.” Oh, yeah?  Did you know that the actor, Stephen Lang, was also none other than Ike Clanton in the amazing “Tombstone?”  Yep.  Take a gander…

Technically, they're both saying "Get off mah land!"

Now you’re impressed, aren’t you?  How ’bout a couple of tri-fectas?  True fanboys already know, but here are some heavyweight character actors.  Jonathan Rhys-Davies, for example. If you’re my age (um, older than forty.  Gulp.) then you probably first ran across this likeable Brit in “Raiders of the Lost Ark” and “Last Crusade” in which he played Indy’s sidekick Sallah. If you’re not yet qualified for AARP, however, you probably know him from his roles in the “Lord of the Rings” franchise.  Yes, I said “roles” because not only did he portray Gimli the dwarf (i.e., comic relief) he also voiced Treebeard the Ent (i.e., environmental message.)  Oh, and he’s also the voice of Spongebob villain Man Ray.  True story.

“Wait!” You object. “Cartoon characters? That’s not fair.”  I respect your opinion.  Also?  You’ll hate this next one: more Spongebob.  The voice of one of my personal heroes, Eugene H. Krabs, is none other than the rich, deep baritone of Mr. Clancy Brown.  That’s the same Clancy Brown that gave life to The Kurgan from “Highlander” and Sgt. Zim in “Starship Troopers.”  Clancy is awesome, and die-hards will also remember him from one of my all-time favorites, “The Adventures of Buckaroo Banzai.”  The problem with an actor like Clancy Brown is that I quickly run out of space for pictures of his various roles.  That’s a good thing.

In some ways, Mr. Krabs is the most intimidating dude in this picture.

Another fantastic actor who disappears into his roles is Ron Perlman.  Nowadays, everyone gets to see his face on shows like “Sons of Anarchy.”  But his claim to fame has been being able to act and emote through layers and layers of prosthetic makeup.  Yes, this is the man behind Vincent, the lead…uh…well, beast on the television show “Beauty and the Beast.”  You may not remember that program, youngsters, as it began its run in nineteen-freaking-eighty-seven, but your moms probably rubbed one out while watching it.  Hell, you may have been conceived after dad came home and found mom rubbing one out to a cat-man who quoted Shakespeare and lived in the sewers.  (Trust me, chicks went CaTCUB for that stuff.)  In-between “Beast” and “SoA” he found time to provide the voice for about a million video game characters (War.  War never changes…) and, oh yeah…he put on a shitload of makeup to create the title character in the “Hellboy” movies.  Prolific? Fuck and yes.

Finally, here’s an M. Night Shyamalan-style twist for you.  I had to scan the credits for this one, because at first I didn’t believe it.  Remember that “Firefly” episode that started with a flashback to Simon and River as kids?  Sure you do.  Anyway, the kid that played “Young Simon?”  Zac Motherfuckin’ Efron.

The same number of people that saw this episode of Firefly saw "New Year's Eve" on opening weekend.

I know that I left out some heavyweights.  Gary Oldman and Edward Norton.  Ewan McGregor.  Etc.  You can IMDB that shit yourself, suckas.  I got me movies to watch. Peace.