Well, here we go, gang. Recently there’s been a bit of a feud between the Star Wars and Star Trek camps. There’s always been a bit of good-natured rivalry here, but with William Shatner and Carrie Fisher going after each other in YouTube videos and such, well…it’s getting kind of ugly. It took the amazing George Takei’s call to solidarity against the Twilight franchise to cool things down. Yep, good ol’ George is like the Gandhi of Sci-Fi. (Only with a better diet, natch.)

The two sides will never see eye-to-eye. It’s natural: Marvel and DC people or Sean Connery and Roger Moore fans have passionate opinions on their favorites, and I won’t even get into how much better Crystal Skull was than Temple of Doom. (Oh, yes. I went there.) But these sort of passions run all the hotter when you’re talking about the two greatest franchises in Sci-Fi history.

Why did this movie suck? Two guesses...

And make no mistake: that’s exactly what we’re dealing with here. TRON, Doctor Who, Battlestar Galactica, Firefly, Farscape…none of them come close to not only the sheer amount of source material, but the number of hard-core fanboys and girls that literally worship at the altars of Roddenberry and Lucas. It’s almost scary. Think about how uncomfortable everyone would be if this same amount of reverence and fanaticism were present in SAW fans and Juggalos. Holy shit, I just started shaking just thinking about it. We’re lucky, people. We’re really lucky that the “Gathering of the Juggalos” is just a once-a-year camp-out concert in rural Illinois. Can you imagine “Jug-Con Sacramento?” George R.R. Martin, Felicia Day, and Wil Wheaton all showing up to chug Faygo and parade around in Jnco Jeans? Ffffffuuuu…

"Hey, everybody! Welcome to the panel on Magnets!"

So, yeah. Star Wars and Star Trek. The big boys. Title fight. And this rumble needs some handicapping to establish a clear winner. I’m going to go ahead and say that no matter which camp you belong to, I don’t think there’s a doubt in anyone’s mind that Star Wars is the clear-cut monetary champion. Hands-down. It’s not even close. Ever see a kid running around the house with his Captain Janeway action figure? No. No, you haven’t. Not that Trek is without merchandising potential…hell, there’ve been at least a couple of high-quality pornographic parodies. Prolly because there’s more sex in Trek. More on that later. Right now, we’re going to call Round One, otherwise known as The Money Round, to Star Wars. Ding!

Round two is all about cultural impact, and it’s also a doozy. In fact, the judges (which is me. I am the judges. All of ’em.) are calling this one a lot closer. It’s a helluva fight just based on catch-phrases alone. Use the force! Beam me up! I’ve got a bad feeling about this! Set phasers to “stun!” A galaxy far, far away…where no man has gone before! Live long and prosper! Punch it, Chewie! That’s no moon… Dammit, Jim, I’m a Doctor, not a magician!  It’s a TRAP! But again, Star Wars gets the edge. It’s a slight one, but it’s there. Know anyone with a Star Wars-themed tattoo? Sure you do. Even non-geeks get the Imperial or Rebellion logos…some get Yoda, lightsabers, Chewie, the Death Star, perhaps a Stormtrooper helmet. Hard-core types will get that made-up Jedi language or a Darth Maul backpiece. Now, do you know anyone with a Star Fleet tattoo? No? Scotty? Maybe a portrait of Kirk & Spock from the original series? Still no? Hmm. Okay, how about this test: using only your mouth, make a lightsaber noise. Now do a TIE fighter. Good. Try Chewie’s guttural growl followed by R2’s beeps and whistles. Outstanding. Now imitate a phaser set to “kill.” Go ahead. Any time now. We’re waiting. Okay, how about a photon torpedo? Easy! Do it, please. Now. Go. Not so easy, is it? No, it isn’t. Not because the bridge of the Enterprise doesn’t have a familiar thrum, or that the transporter beam isn’t immediately recognizable…it’s just that those things haven’t ever saturated the public consciousness. They haven’t been embraced wholeheartedly and re-sampled to the point of insertion into literally every other media. Sure, Spock’s “Fascinating” and “pure energy” made it into that one dance song…but beyond that, well…yeah. Ding.

This...this wasn't really a thing, was it?

So far, it looks like this fight is all Star Wars! But wait…what about the important stuff, like characters, story, and plot? Ah, NOW we’ve got a fight on our hands. Quick, who’s your favorite Jedi? It’s not Luke. Sure as hell ain’t Qui-Gonn. Mace Windu? Maybe. Okay, non-Jedi characters. Han. Boba Fett. Lando. Chewie. Vader. And, uh…Jimmy Smits? Some CG Gungan? Okay, look at the Star Trek crews(s)…Kirk, Spock, McCoy, Scotty, Chekhov, Sulu, Uhura…Picard, Riker, Geordie, Data, Wesley, Worf, Troi…Captain Sisko…Nurse Chapel…Q…Jesus, what about the Voyager crew? The one with the holographic doctor? Dang. The point is, the Star Trek universe is just filled by more and better characters. Sure, Lucas only really made six (three) films and used those to build all the print and cartoon spin-offs. Meanwhile, there have been several Trek television series and a slew of movies. But the cool thing about Trek is how distinctly different and realistic the characters all are. In Star Wars, once you get past Han, Luke, Leia, Chewie…it thins wayyyy the fuck out. The droids are cool, Yoda is cute…but as kids, nobody wanted to be Grand Moff Tarkin or Admiral Ackbar. The majority of the secondary roles were bland and unexciting. It’s almost like Lucas would rather just insert some computer-generated place holders instead of actors! Oh. Oh, yeah…round three to Star Trek. Ding!

No, Cthulhu...THIS is the "Thing That Should Not Be."

Spoiler alert: this round is going to Star Trek.  Because it’s all about sex. Yep. Star Wars does have one ace up its sleeve.  Ever heard of the “Slave Leia” costume?  You GOD DAMN RIGHT YOU HAVE! It’s almost to the point of being over-exposed (pun intended.)  You can see this outfit at every. Convention. Ever.  And I mean you can see girls dressed as Slave Leia at the Progressive Insurance convention.  (Bad news?  It’s that Flo chick. But still…) Wil Wheaton went on record at Comic Con San Diego last year as saying  “Damn!  Slave Leia is sexy!” Okay, I made that quote up.  I just wanted to impress the Redditors and Big Bang Theory fans (LOVE you guys!) 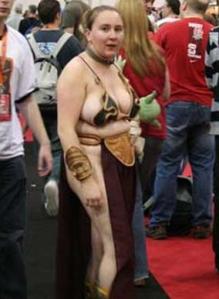 But beyond that one outfit from one small chunk of one movie, what does Star Wars offer us?  That time when Padme got her shirt ripped and we could see her taut, smooth midriff?  Not bad.  And then there was the time, that, uh…well, remember when…um…that one chick…oh.  Oh, yeah.  That’s about it.  Meanwhile, in the ‘Trek ‘verse they had AN ENTIRE RACE OF ALIEN WOMEN BRED AS SEX SLAVES.  You GOD DAMN RIGHT THEY DID!  Oh, and in the sexually-enlightened 60’s when the show first aired, it not only featured somewhat sexist mini-skirt and go-go boot uniforms for the female crew members, there was also the first-ever inter-racial kiss shown on primetime.  Star Trek cared less than the ol’ honey badger!  They just wanted to tell good stories!  And hot chicks? How about that smoking communications officer, Uhura?  Or the saucy Yeoman Rand, who was totally crushing on Kirk?  Or nurse Chapel?  Later on you had sexy redhead Dr. Beverly Crusher, sexy security officer Tasha Yar, and sort-of sexy medium or whatever Deanna Troi?  How about when Kirstie Alley was still sexy as Lt. Saavik in “Wrath of Khan?”  Seven of muhfuh NINE! Yes, sex was going on EVERYWHERE!  Picard and Crusher!  Data and Yar!  Riker and Troi!  Troi and Worf! Troi and the  Univeristy of North Dakota Fighting Sioux!  Kirk and every female from here to the Neutral Zone!  And yet, there’s this simple fact regarding sex in the Star Wars universe: the only couple we KNOW hooked up was Anakin and Padme.  Sure, we like to think that Han and Leia got busy…but we don’t know.  Lando should have been the pimp of the galaxy, but we never see him do more than kiss the hand of a Princess.  Yawn.  Ding!

It's the laurels. Bitches love laurels.

Finally, let’s looks at the philosophy of both these franchises.  Despite all the similarities, e.g. faster-than-light travel, beam weapons, alien species hanging with humans, AI companions, and exotic planets/landscapes, there is a bit of a gulf between the two philosophically.  Trek has always prided itself (sometimes TOO much) on how much of the show was based on “plausible science.” At least they try to give some sort of basis for the technology.  For example, the Warp Drive apparently runs on some sort of anti-matter channeled by dilithium crystals and whatnot.  Okay. In Star Wars, the hyperdrive make ships jump to light speed.  No further explanation needed. (We assume it has something to do with midichlorians.) In Star Trek, transporters break down the individual at a sub-atomic level and then re-assemble the parts at another location.  In Star Wars, well…they just fly everywhere.  It’s like Trek is New York with excellent mass transit systems, and Star Wars is L.A. where everyone takes their own car. And I think that’s the bottom line.  Each of these multi-media sci-fi empires is excellent.  They’re just different. Star Trek is science, Star Wars is magic.  One is Battlefield 3 and one is Modern Warfare 3.  College football or the NFL.  Coors Light and Miller Light.  Spring training or the World Series. Different, but good.  Both look with wonder and hope at the vastness of space and see possibilities instead of fear.  Both promote logic and sense over reckless violence and hate.  And they both have that cool hyperspace/warp thing that makes the stars look like you’re driving down the highway at night in a snowstorm (you KNOW you imagine that shit!  Don’t lie to me!)  So this round is a draw. Ding.

SLOW THE FUCK DOWN! This is a rear-wheel hyperdrive!!

So, judges?  Wow.  Tougher than I thought.  The score sheet is tied.  But we need a winner, ’cause that’s what ‘Merica LOVES!  And I have to pick Star Wars as “The Greatest Science Fiction Canon and Works in All of Recorded History.”  I do so because of the sheer amount of people that have bought into it.  I do so because my kids and I can sit and watch “Empire Strikes Back” and enjoy it together.  I do so because as cool as phasers are, I have ALWAYS wanted a real, working lightsaber.  And so have you.  Now, my dissenting opinion is this:  Star Trek is the better written, acted, and thought-out series.  In this fight, better is not necessarily greater.  A large pizza at D’Agostino’s in Chicago is great!  A grilled chicken flatbread wrap is better for you.  So.  Trek is better for your mind.  Star Wars just tastes a little better, even though it will slowly kill you. (Actually, that’s just George Lucas killing your childhood with CGFX.)  In a perfect world, you’d combine the two, but that would be overkill.  It would ruin everything.  It would be like that stupid Transformers/Star Wars toy line.  Some things are better on their own.  Although… 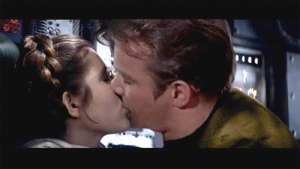 I’d like to take this time to remind you that there’s a very cool comment section below!  Just in case! And thanks for reading.  Live long and prosper, and may the Force be with you.

27 thoughts on “The Trek Wars”