Okay, then.  Let’s do this.  Here, finally, are some of my favorite films.  I’ve decided I like talking about movies, so this won’t be the last time I go on and on…but it’s a start.  In particular, these are “older” films.  Vintage, if you will.  And ones that I will sit and watch every single time they’re on TCM or whatever.  They’re not necessarily my favorite films of all time, mind you…but at least one would be in the top-five.

War of the Worlds

Not the fairly decent 2005 Spielberg film.  That one is okay, and in some ways closer to the original H.G. Wells novel.  But as a general epic sci-fi classic, it’s hard to beat this one from 1953.

What? Can't be Martians. Martians use flying saucers. Must be Commies!

Why It’s Great: Honestly, there was a lot of crap in 50’s science fiction.  Don’t get me wrong, I love ALL of  it. After “The Day the Earth Stood Still” and this one, well…the quality drops off the map.  Now that I think about it, 50’s sci-fi was like slasher films are today.  Not a month goes by without a Saw rip-off or remake of an 80’s franchise like “Halloween” or “Friday the 13th.”  But kids keep paying to see ’em, so they keep making ’em. This film was unique in that it had a decent budget, glorious Technicolor, and a wonderful sense of “how the hell do we beat these things?” fear that doesn’t really let up until the end.  Today we know that Will Smith will find a way to save us, but during the early days of the Cold War nobody knew any such thing.  The Godless Commies were everywhere, and could be knocking at your door RIGHT NOW!!  DON’T ANSWER THE DOOR!  GAAAAHHH!!! COMMIES!!  Today everything is a parable about terrorism and how we handle it.  Back then, everything was Commies.

Like “Hogan’s Heroes?”  Pretty funny television show, considering it was based in, you know…a German POW camp.  That show was very loosely based on this 1953 film, which was in turn based on a Broadway stage play which was based on actual experiences by the playwright. Also? 1953 was apparently a great year to go to the movies. 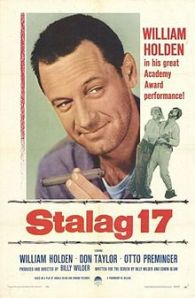 He looks smug because he totally escapes.

Why It’s Great: I would give one of my testicles to play  William Holden’s role  in this film.  The whole cast is epic, but he shines as Sefton, a role he won the Academy Award for that year. Not bad, considering he wanted to turn down the role because he thought the character was too cynical and selfish.  Those attributes, however, is why he’s one of my favorite leads ever. Along with Rick from “Casablanca” (spoiler alert: Casablanca is on this list) he epitomized the “anti-hero.”  Han Solo, Wolverine, etc. are direct descendants of J.J. Sefton.  And for storytelling, it isn’t ever better than the penultimate scene where Sefton steps from the shadows after listening to the German mole discuss plans with the Nazis, lights a cigar, and says “Ach, so!”  SCENE ENDS.  FADE OUT.

Fun Fact: Holden was perfectly cast as Sefton, beating out Charlton Heston and Kirk Douglas for the role that he didn’t even want to begin with.  How perfect?  He almost seemed to be in character when he accepted his Oscar.  His speech was a simple “Thank you.”  Then he exited, stage left.

Singin’ in the Rain

You’re saying “Whoa, whoa, WHOA!! A MUSICAL?!?  How the..WHAAAAAAT?!?” Calm down.  There have been dozens of great musicals, and I’m man enough to admit that I love seeing Ewan McGregor woo ladies in the crappy “A Life Less Ordinary” and the delightful “Moulin Rouge.”  Dude…that’s Mark Fucking Renton you’re talking about!  Obi Wan Fucking Kenobi!  If he’s man enough, then shut up and hear the news: this film is one of my all-time faves.  In 1952, this was like the damned pinnacle of cinematic brilliance on so many levels.  Cinematography, story, acting, singing, dancing, betrayal…perfect. 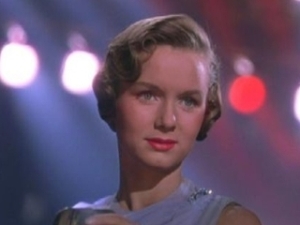 Why It’s Great: Dude…Donald O’Connor is the second-best dancer in this film.  Gene Muthafukin Kelly not only dances, sings, and acts the lead, he choreographed every scene and, oh, by the way, DIRECTED the fucking film!  Fuck!  But Debbie Reynolds…oh, sweet Mother of Mercy.  If you can watch this movie and not fall head-over-heels in love with Kathy Selden, then you are a gay male or totally dead on the inside. Also, try and watch this thing and not have at least four of the songs stuck in your head for the REST OF YOUR GODDAMN LIFE.

Fun Fact(s): A movie this great has too many to mention. Here are the highlights…

Debbie Reynolds had no dancing experience.  She was a gymnast (even hotter!) and her stumbles during rehearsals caused Gene Kelly to insult her.  She went and cried under a piano, where none other than Fred Muthafuckin Astaire found her, comforted her (aww, yeah!) and TAUGHT HER TO DANCE.  In your FACE, Gene Kelly!

But Gene was still a man, baby.  During the title number, Gene danced around in “rain” made of milk and Debbie Reynolds’ tears.  It caused his suit to shrink over the 2-3 days it took to film the scene.  Which would be bad enough if he weren’t also deathly ill and running a 103-degree fever. Nowadays Lindsay Lohan calls in sick for a hangnail during the shoot for “Herbie: Fully Loaded.”

Speaking of illness, funnyman Donald O’Connor (my favorite) had to be hospitalized after shooting the “Make ‘Em Laugh” number.  It was a very physically demanding scene, with Donald flopping over couches and throwing himself to the floor repeatedly Johnny Knoxville-style.  Apparently it was a little too much for a skinny dude who smoked FOUR PACKS OF CIGARETTES A DAY.  Eisenhower smoked that much, but he was A) Planning the invasion of goddamn Europe and B) Not dancing with a mop.

Holy crap.  I still have two more movies to go!  You know what that means?  Yep.  Part Three.  Sigh.  See you in a couple of days, then?