This past Labor Day I had the good fortune (and bad foresight) to take my kids to possibly the worst amusement park ever.  And by “amusement park” I mean Glenbrook Square Mall.  I don’t mean to malign the mall itself; in fact, it’s just dandy.  You can get Auntie Whatchamacallit Cinnamon Pretzels and pick up the latest My Chemical Romance t-shirt from Hot Topic!  But when there’s nothing else to do on a holiday, you gotta take the kids somewhere.  The Mall was somewhere.

Of course, being Labor Day, the giant carousel was not open for business.  Crap. Strike one.  That meant we had to settle for the escalator.  Good God almighty, we rode the escalator up and down about thirty times.  Then we got started on the coin-operated rides.  For fuck’s sake, has there ever been a bigger rip-off?  You might as well save all your quarters, go to Vegas, and put it all on red.  Win or lose, you’ll have a batter time than trying to figure which one of these contraptions is actually running.  Example:  The Bob the Builder Super Back-And-Forth Vibrating Backhoe!  On a good day this thing probably moves less than your mom’s old vibrator.  As it happened, this particular day there was more life in Dr. Hawking’s pecker.  Hey, Bob…got an idea.  Maybe you could “build” a goddam kids’ ride that works.  Perhaps one that doesn’t include a quarter slot that is perpetually jammed with quarters, dimes, two gummi bears, and what looks like a big scab with hair in it. Couldja do that for us Bob-o?  Fan-tastic!  The only good thing about this was watching the Amish kids try to figure it out.  No shit.  I guess they figure that riding a real backhoe is a sin against God, but a dopey plastic version would be just the thing to show their parents that Amish or no, we’re REBELLIOUS TEENS!

Or they could just watch this.

Instead, my two boys rode the little English Ice Cream Truck.  I know that this “ride” is of English origin not because it asked for “Tuppence a ride, guv’na!” but because (almost as good) it features a little pretend sales stand that offers “Ice Lollys.”  I’ll be GottDammed…ice lollys.  Sen-fucking-sational!  As a father, however, I must admit to a swelling of pride as I realized that my 6-year-old was enlisting the help of my 2-year-old to literally deal out of the truck, Cheech and Chong style.  And I’m pretty sure the younger of the two referred to his brother as “Big Worm.” (Wipes away a tear…) 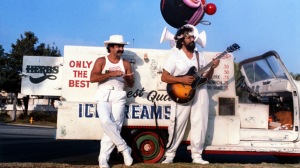 Had the mall been closed altogether on Labor Day, I would have had to resort to Plan-B: The Car Wash.  What the fuck is it about the goddam car wash?  For some kids it’s the most magical journey they will ever take. It’s as if they’re losing their virginity to a dozen slightly stoned Salma Hayeks while some other (preferably Asian) kid does their homework while The Clone Wars plays on the big screen.  Bliss.  However, for some children the car wash is a house of horrors.  For them it is the boat ride from the original Willy Wonka, if that boat ride of Willy’s actually took place aboard the Event Horizon and the Oompa Loompas were actually the creature from John Carpenter’s The Thing. 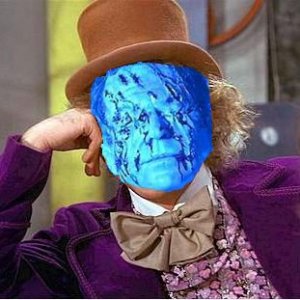 3 thoughts on “Ah, These Kids Today…Part One.”